Travel broadens the mind” it is usually said, when one packs his or her suitcase and hits the road, but this time we could become more open-minded people without leaving our hometown Bieruń (Poland), thanks to two guests, who visited our school in May - Kubra from Turkey and Munisch from India. They visited Poland as volunteers of AIESEC, which is the international organisation of young people, who work on global issues and focus on developing leadership skills and student exchange programmes. As one of the goals of this organisation is cross-cultural understanding, our guests’ task was to present their culture to Polish students. 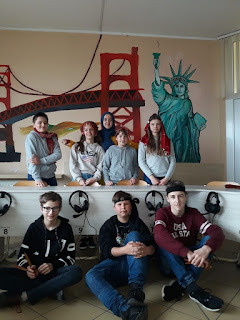 Kubra, a student of Communication Technology, came to Poland in May, which this year was exceptionally chilly, it was about 9 degrees Celsius during day, she felt really cold, it was like a middle of a winter for her. She told us that the temperature in Adana (a town in the south of the country) reaches up to 50 degrees Celsius, what is shocking to us, because when the temperature is around 30 degrees in Bieruń we’re dying and we call it a heat wave.

Kubra showed us a multimedia presentation about her country – she talked about geography,  traditional cuisine, music, holidays and habits. What is more, she involved us in some activities, some of students put on traditional clothes, some were learning how to dance a Turkish folk dance. 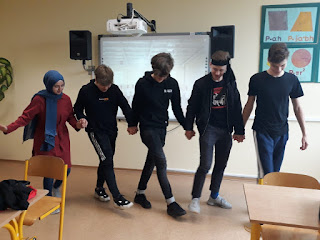 Turkey is quite well-liked holiday destination for Poles, but still some customs are not so apparent to us – for example, people in Turkey celebrate Children's Day, but also Youth and Sport Day – which is rather for teenagers.  Kebab, a typical Turkish fast food is popular among young people in Poland, but menemen or köfte are practically unknown. We have learnt that Turkey is a country of cultural disparity - on one hand some people follow traditional way of life - wear hijab, celebrate traditional holidays, and on the other hand some Turkish people are more cosmopolitan and are inspired by Turkish Eurovision winner - Sertab Erener, who loves wearing low-cut dresses. The above example might be shallow, but it illustrates clearly attitude towards lifestyle. Turkey as each country is much more intricate then the stereotypes about it. 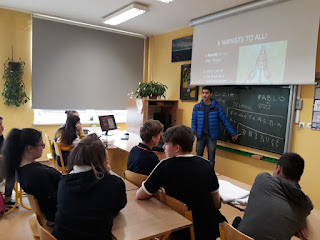 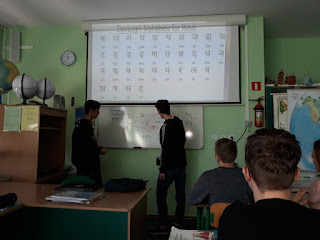 Our second guest, Munich came to Bieruń from India, which is quite exotic and distant country for us. Munich was raised in the south of India, but now he studies in the north. He told us not only about his education, family, but also about India, its administrative division, population, famous tourist attractions, religion and some curiosities. What is quite unusual to us is the fact that Hindu people believe in a circular rather than a linear concept of time.

The fact that Indians don’t use cutlery was astonishing for us as well, although during his visit in Europe, Munich did use them when he was eating. Next, we have learnt about Sikhs – who do not worship any god but a book. Munich told us a romantic story of Taj Mahal – which is UNESCO’s Heritage Site.

The best part of his meetings was when he translated our names into Hindi, we found the letters peculiarly decorative. In addition, Munich taught us a few basic phrases in Hindi, for example numbers, greetings, etc. After lessons many pupils while passing by our guest in the corridor were saying NAMASTE (Indian greeting)! It was a lot of fun!
All students (including me) were really excited and content that someone from different side of the world came, just hung out with us, and taught us in an innovative way things about their countries. We appreciate that we had such an opportunity.
Facebook
Twitter
Pinterest
More
Less
Tumblr
Mix
E-Mail
GMail
LinkedIn
Reddit
XING
WhatsApp
Hacker News
VK
Telegram
OK
Line
Turkey
Prev Next Home