THE IMPORTANCE OF THE COLOSSEUM.

When we went to Rome in our last school exchange of students, we were in the Vatican a very cool place. After that, we saw the city from a bus where a tourist guide was explaining things about the city, which is a World Heritage Site by UNESCO. 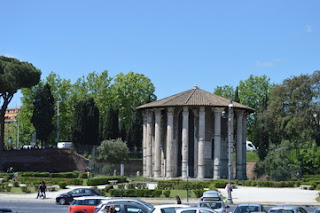 The Temple of Hercules Victor from the bus.

When we finished the guided tour by bus, we ate near Piazza Venezia and, after lunch, we went to see the Colosseum where we discovered what is a great monument of society and the great pit where the ancient Romans fought and risked their lives. We found out many details about what life was like at the time of the Romans and could almost feel what the “gladiators felt”. It was impressive and scary at the same time. It’s important that we keep this kind of monuments in good condtions to learn about our ancestors and not to repeat habits and ways of life which don’t respect the human life and the freedom of the human being. The people who used to fight at the Colosseum were slaves and prisoners. 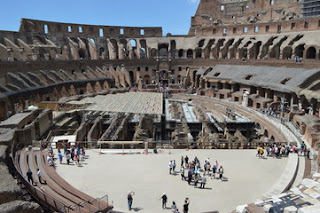 Interior of the Colosseum

We learnt as well that, due to the Roman influence, we share other smaller amphitheatres along Europe and North-Africa. A few of them are still used today for opera or theatre performances like the ones in Verona (Italy) or Pula (Croatia) or for bull-fighting shows, like those in Arles or Nimes (France). These are influences of a previous culture which was common to most of Europe and North-Africa.
Exterior of the Colosseum 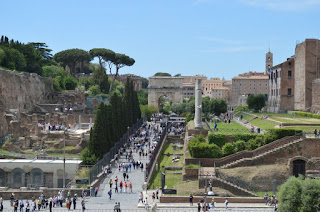 The Roman Forum from the Colosseum.

The Forum can be seen from some arches in the Colosseum. It was the place where most social life took place in Roman times, we could say that like at the main square in a city, where the most important buildings are located. Those related to goverment, religion and commerce. It shows us how people used to live in that period of history.
After seeing the Colosseum, we went to see the Fontana di Trevi, which was amazing, where clearly we threw a coin and wished what the prophecy says comes true (it says that if you throw a coin, you’ll come back to Rome). When we just saw the fountain we went to see the Pantheon where our teacher, Alfonso, almost lost his cell. It is the best-preserved building of ancient Rome and displays an enormous round hole in the ceiling which lets the light in. Its use is not known for sure. 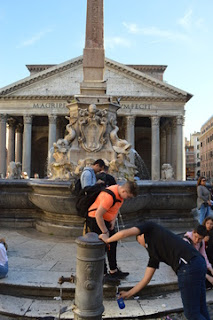 The Pantheon behind the fountain.