CONSUMÓPOLIS:INTRODUCTION TO THE PROJECT.
Through the present year, our school, I.E.S. de Catabois in Ferrol, Spain, has been taking part in a project called ‘Consumópolis’. We consider it a preparation for an Erasmu+ KA we have applied for, which is called ‘Recyclart’.
This project was born to make the students aware of the importance of recycling, reducing and reusing so that they realize how our lives can change for the better and how we can keep sustainability at acceptable levels thanks to recyclage.

Here is how it worked:
CATEGORIES.
It consisted in creating some products from waste or unused materials.
As the project was really engaging to students, three groups out of four in total at schooldesigned and built products. All of them were presented to the “Consumópolis” contest and two of them won second prizes.
1st year ESO: Rubber trainers
3th year ESO: USB fan
4th year ESO: Solar oven
DESCRIPTION OF THE PRODUCTS CREATED.
1ST year ESO: RINAK RUBBER SPORT TRAINERS
Choosing the product
There were three suggested types of products to choose from: clothes, electronic devices or sports clothing. Each of the three participating levels had to select one of them. The students in this year chose sports clothing. After brainstorming, the group decided to make a pair of trainers especially designed for running using recycled rubber from bicycle tyres. 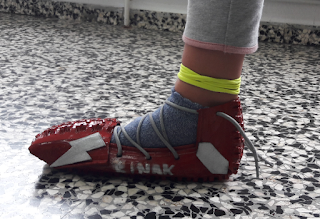 Required materials
It was agreed that the trainers would be tied with laces and would be adorned with designs made of foamy, would be painted in red and adorned with silver-coloured foamy. In addition, they would display the name of the group, RINAK, on both sides. Most materials like foamy, both red and silver spray-on acrylic paint, glue, silicone, staples, cutter, scissors, silicone gun and stapler were available at school. We got the bicycle tyre from a scrapyard, the mentor of the group lent us a belt drill and the laces were a pair of spare ones which hadn’t been used.
Manufacturing process
The cover was cut into four pieces. It was analysed how the trainers could be made by folding the material and studying what the best shape could be. When it was clear enough, we measured the size from a fellow student foot. One of the trainers was formed by shaping it to the foot, then closing and stapling it. The spare parts of the cover were cut.
When the student who was acting as a model tried the design, we found out that the staples got caught up and we had to undo everything and staple it again but this time from the inside to the outside. It was agreed that the staples had to be covered so we designed foamy shapes to do so. Once the trainers had been finished, we had to make the lace holes. By using a belt drill, we could make them with effort.
The next step consisted in colouring the trainers in red with the spray-on acrylic paint. While a few students were colouring them, some others were cutting and painting in silver the shapes of foamy. 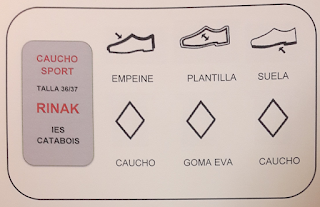 Choosing the product
In the first session of work, this group decided to choose an electronic device amongst the proposed fields. After carrying out a little brainstorming it was agreed that the product to be made would be a USB fan. It made sense as it would refresh the ICT classrooms which gave off a lot of heat due to the simultaneous use of lots of computers.
Required materials
The students suggested ideas about the design of the device and the materials were selected accordingly. The fan would be built entirely with recycled materials: the base and the screws would be made from waste cardboard, the stand would come from a cylindrical roll of aluminium foil, which had been finished, the USB cable belonged to the mouse of a computer which didn’t work as well as the engine was got from a toy which wasn’t used any more. All was painted in silver and black. All the materials like cardboard, silver and black spray-on acrylic paint, silicone, cutter, scissors, compass, silicone gun, USB cable and engine were available at school.

Manufacturing process
1. In pairs, the plug on the opposite side of the one which must be connected to the computer was cut from the cable. The plastic cover which protects the wire was removed with the help of the technology teacher. Then four wires in different colours showed up: white, green, red and black. The green and white wires were cancelled with the use of some tape while the ones remaining (red and black) were peeled as they would be the ones to establish the connection and transmit electricity.
2. The other members of the team drew a circle with the compass and cut (as symmetrically as possible) 8 sections which would form the screws to provide wind.
3. Afterwards, the silicone gun was used to separate the screws permanently and to tilt them so as to provide the fan with a suitable propeller.
4. Once we had got the propeller, a new circle which would serve as the base was cut. It was attached to the cylindrical roll of aluminium foil which would hold the screw engine.
5. Then we made a hole, which would allow to insert and keep the USB cable inside the cylindre, in the lower part of the stand. This cable would provide the connection between the engine and the USB port. The next step consisted in fixing the engine to the upper part of the stand.
6. The red and black cables were fastened to the DCengine with the use of a soldering tin and the help of the technology teacher, strengthening the corresponding connections.
7. The propeller was attached to the engine by means of the silicone gun again.
8. In the end, the propeller was painted in silver and black. 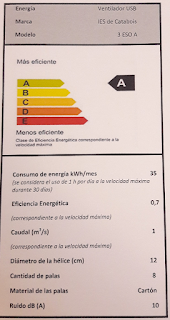 4TH year ESO: Solar oven
Choosing the product
After carrying out a hard procedure to decide the product to ellaborate, it was eventually agreed that a solar oven would be the most convenient one for three main reasons: