ADMIN    4/16/2018    Art , CulturE , Czech Republic , Europe , exchange of students , Ferrol , IES de Catabois , UNESCO    Comment
By Nuno Baamonde Beceiro (4th year ESO)
This year we´ve been lucky: we took part in a foreign exchange with a school from Prague, seventeen of us and fifteen Czech students. They came to our school and houses in February, and we returned the visit in March, the week before Easter. 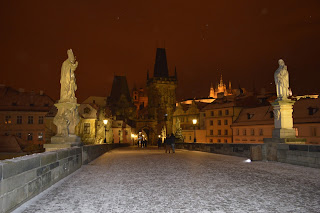 THE VISITS:
The first day we arrived late, but we had already booked the apartments for the first night. Next morning, all of us were surprised at how soon the sunrise was, and went to the most famous bridge in Prague, Charles Bridge, before breakfast. It was less than five minutes from the apartment!. 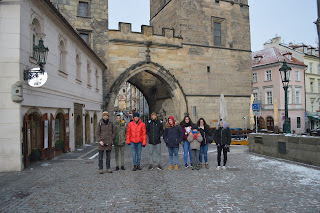 Monday: we visited the Prague Castle and the park beneath, where we had a long walk. There, the view over the city is amazing, although Prague is amazing no matter where you look at it from. The castle is huge, it is so big that we had to go back on Tuesday. Something that grabbed my attention was how clean everything was: you can´t see a cigarette butt or chewing gum on the ground. 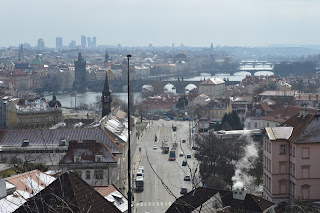 That afternoon, Karel (“my Czech”) and I went to visit the Technology Museum with Adam, Simon, Miguel and Joel. They had planes, cars, bicycles, motorbikes…even two steam train engines! They showed you the progress over the years. Then, we went to a shopping center, and there we entered in a cafeteria with some Xbox available for customers, and Miguel and I got lost looking for the toilets. We entered in a “Fashion Club” instead! First we got a bit startled, but…how we laughed in the end! 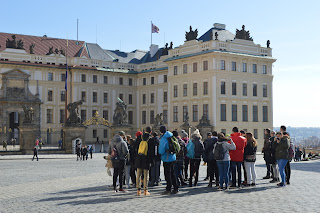 On Tuesday, we visited the Castle of Prague again, and, then, “Malá Strana” (“little quarter”), passing over Charles Bridge one more time. In Malá Strana, we went to the Church of Our Lady Victorius and could see the “Infant Jesus of Prague”, a sculpture of baby Jesus. Another interesting place was “Lennon Wall”. On this wall, the face of John Lennon would appear painted on it again and again during the communist years, to ask for freedom. 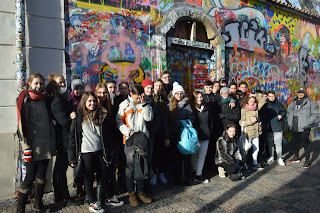 That afternoon, we visited another museum, this one showing miniature trains. They had a large one, so large that it took us fifteen minutes to see it all! They also had a bus and a tram for visitors to control (they were 1:1 scale)…you could control lights, doors, siren….
The Old Castle of Prague was the visit on Wednesday. There, Diego told us a story about a man about to be executed, who ran away riding his horse and jumping from the castle over the river (150 m.!) We also visited the building known as “The Dancing House” by Frank Gehry. In the afternoon, we went to the shopping center again, but this time we found the toilet! 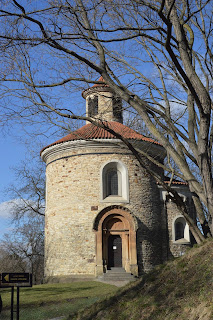 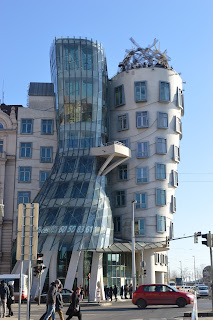 On Thursday morning, we had an English class at school (a big building, by the way: 7 floors). Their auxiliary gave us the lesson, a nice and funny person. I liked it very much! After the lesson, we walked to the Jewish Quarter and the Old City, where the Astronomical clock is located in its tower. Bad luck…it was under maintenance work!
We visited Terezín on Friday, an old city inside a fortress, part of it used as a concentration camp during the 2nd W.W.  In the village, there was a museum honouring the victims, specially the children, because the building housing the museum was their house and school back then. 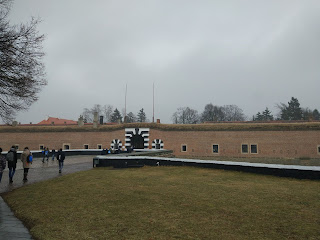 Saturday was “Family Day” and “my family” took me to Kutna-Hora, where you can find a cathedral decorated with…actual human bones! In this town, we had lunch and, then, left and stopped in a field nowhere and played football, rugby, frisbee…that night dinner was at a middle age-style restaurant.
THE STAY:
I felt a little shy in the beginning, but Karel´s mother was so nice that next day I was speaking to them as they were my real family. I taught them some Spanish (buen provecho, hola, adios…) and they taught me some Czech (ahoy, decuiu, dobridem…). I even learnt something by myself: “ziski zastava” (or something like that) meaning “next stop”.
Communication was fun, because English wasn´t the first language for anybody, so we ended up playing mimic and making funny noises to express ourselves!