Transylvanian salty flavour - the Salt Mine in Turda

Can you imagine Transylvania 13 million years ago? Climate was very warm and wet and the region was covered by the sea. Then climate got drier and drier, the disappearing sea left salt behind - the salt still remains. People tried to extract sodium chloride as long ago as in Roman times, but it was not earlier than in 17th century, when the salt mine in Turda was open. The salt mine functioned till 1932. Later it was used for storage of cheese or bombproof shelter during World War II. In 1992 it became a tourist attraction – one of the largest and oldest mines in Europe. We were lucky to visit it during our last project meeting. 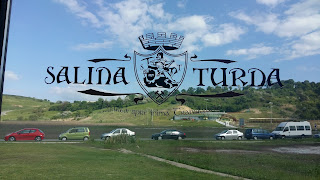 The salt mine consists of a few chambers, which were created by mining, and they make a great impression on tourists because they are enormous. Going down the stairs to the first chamber we could observe the spatial interior from different levels so at the same time from different perspectives. We found the icicles of salt on the face of chamber spectacular as well as the wavy forms created by the brighter and darker layers of rocks. In the chambers one can find an amphitheatre, a Ferris wheel, a pitch and putt course, a bowling alley and a playground. There are even boats and you can paddle it on the salty lake. 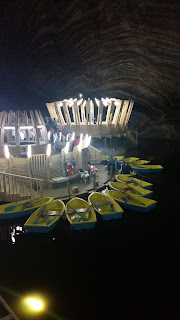 We were surprised with the things we saw in Turda because we had expected something more similar to Polish Salt Mine in Wieliczka which we saw during our first project meeting in 2015. If you haven’t been to Cracow, we recommend you the article with its description written by Spanish students, you can find it here
Wieliczka Salt Mine

In Wieliczka sightseeing is walking 3 km out of 300 km of drifts hewed in the rocks. Drifts lead us to 20 chambers, but they are much smaller than those in Turda. The chambers are filled with sculptures; the largest chamber is a chapel. There are some salty lakes in Wieliczka but tourists are not allowed to use them.
In Polish salt mine there are some attractions for tourists as treasure hunting in full mining outfit or overnight stay. But classic visit to Wieliczka is getting to know the history and tradition. The Salt mine in Turda focuses on modernity and entertainment, in fact it is an underground funfair. Children are having great time there that is why in Rudolf mine it is so noisy.

We are glad that during our project we were able to see two salt mines they vary, yet both are worth seeing. 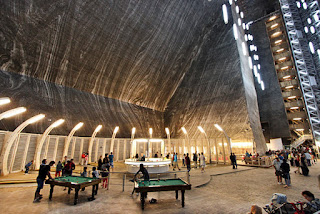