Street art or the expression of artists on the walls of many European towns and cities today has provided them with a new image, as you can see in the photograph below. It is called Polish-Hungarian Friendship Tree and shows the close connection between the Polish and Hungarian cultures. There is a text on the mural which reads:
“Hungary and Poland are two forever-living oaks, which have their own trunks, but their roots are far beneath the earth: they have joined and invisibly merged. So the existence and strength of each one is tied to life and health of the other.” — Stanislaw Worcell 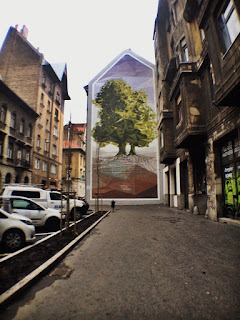 In October 2015, following the initiative of one of our students, we started investigating this form of art in Ferrol and have continued doing so until the end of the Erasmus+ project What's New on the News. We have found out that the towns or cities don't need to be large ones so as to display beautiful murals and, therefore, we have investigated small towns in Galicia as well as large cities like Catania, Budapest or Cracow. We have realised there are many more places displaying street art than we initially thought and we plan to go on investigating them in the future. 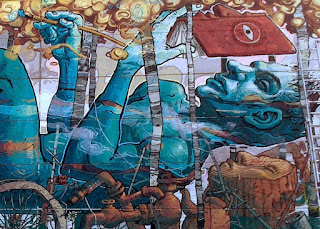 In the e-book you will find below, we explain a little bit about the meaning of some of the most outstanding pieces of street art that we have visited in the trips we have carried out throughout the project and we display lots of photographs which illustrate our work.
We hope you enjoy the article and wish this way of art will continue filling our streets. Look out! Maybe there is a nice mural behind the next corner in your village, town or city and you haven't noticed it.
Street art spreads its wings e-book.