It’s easy to find the answer for the question: which square is the most important in Cracow? - as its name suggests: the Main Square. In Madrid the answer is more complicated. Writing the articles about the squares in Cracow and Madrid we took into account Plaza Mayor and Puerta del Sol you can read about it here:

Squares of Madrid and Cracow

During our journey to Romania we stopped in Budapest and decided to focus on the squares once again, we were wondering which square in Hungarian capital city is the most significant. But as in Madrid the answer turned out to be tricky. There are a few candidates for the title of the most crucial place in Budapest so it’s not easy to create the ranking. In the article we present you a few places, we have visited, and their different functions.


The first square we saw was Kossuth Lajos Square, it’s spacious, surrounded by dignified buildings, with the outstanding House of Parliament. The function of that building has got impact on the Kossuth Lajos Square and that’s why the national ceremonies are held here. On the square there are monuments of Ferenc Rákóczi II, Kossuth Lajos and commemorative space (now under construction) for the victims of the Hungarian Revolution in 1956, when many young people died from bullets during manifestation in front of the parliament. The place is important for us, because in Poland a few months earlier in 1956 there were similar manifestations. 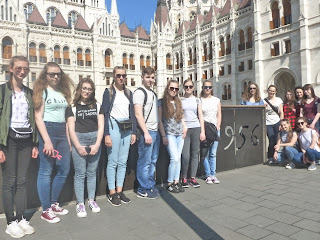 Despite of the monuments standing on the square, we think that tourists visit that place mainly to admire the architecture of parliament and the square’s function is minor. Tourists are walking here, taking pictures but they are not staying for longer. The large surface of square is popular among roller skaters.
In Budapest, we have visited also different squares, which even in higher extent than Kossuth Lajos Square are dominated by the surrounding buildings, e.g. the square of the Holy Trinity; in the centre there is a Baroque column of the Holy Trinity. But above the square there are Matthias Church’s colourful roof tiles and towers, which have strong influence on the beauty of the place. Next to the square there is Fishermen’s Bastion with gorgeous view of Danube and Pest. Lots of tourists come here to admire both mentioned buildings.


It’s similar with St. Stephen’s square, it’s surrounded by restaurants and cafés, but it is the basilica that plays the first fiddle. Only in winter, the square pulls the tourists attention away with the Christmas market.

Heroes’ Square is another popular tourist attraction; it’s in a certain distance from the heart of Pest. It was built in 19th century to celebrate one thousand years since Magyar conquest. In the middle there is a statue of Monument of the Thousandth Anniversary. On the square there is also colonnade with the statues of the most important Hungarian leaders. On the Heroes’ Square, as on the Kossuth Lajos Square national celebrations are held. 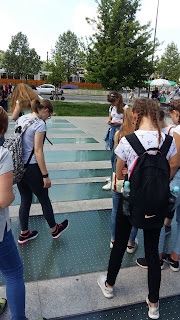 Last but not least, we’d like to mention the March 15 Square. It is crucial date for the Hungarians as the rebellion against the Austria-Hungarian Empire began on March 15th 1848. But no national ceremonies take place here; the place is a little bit hidden and may be left unnoticed to a tourist if walking only by main streets. It is a good place to admire the Elisabeth Bridge and the Gellert Hill, but it’s not the only advantage of the place – the underground ruins of Roman Empire forts catch the tourists’ attention. Here was the border of the Empire, on the other side there was the land of barbarian tribes. The forts belonged to ancient town of Aquincum. The map on the pavement of Danube River and Roman forts makes it is easier to imagine past reality. We found the map on the pavement marvelous. Beside the history of the place, the March 15th square is a good and peaceful place to have a rest and a scoop of ice-cream after long walk through the town.