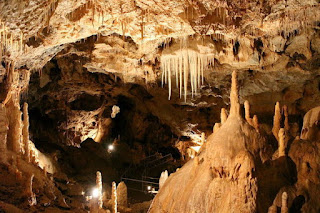 There are lots of caves in Romania and one of them is the Bears Cave.We knew that Transylvania  is famous for its caves before visiting there.
We visited some of the caves while we were in Beius. When we saw them we were really fascinated.
We visited the Bears Cave on the second day of our visit. We waited for a while before entering the cave, people should enter the cave in groups. While we were waiting outside, we were watching the beautiful view of Apuseni Mountains. The Bears Cave is located in the Apuseni Mountains in Chişcau, Romania. There are a lot of karstic shapes inside the cave. The cave attracts attention with its magnificient formations, especially its stalagmities. The Cave was accidentally discovered in 1975.  It is structured on two distinct levels, the upper gallery and the lower gallery. The cave had been sheltered for the bears thosand of years ago. It is said that while 140 bears were inside the cave, a strong eartquake caused a rock to block the cave entrance and so the bears were trapped inside. There are many bear skeletons inside the cave and one is fully exhibited.  Since 1980, The Bears Cave is open for the visitors and has become a very popular tourist attraction. Outside the cave, there are many local shops so you can buy local food or souvenirs.  Finally,  we would  like to write that the cave affected us very much like the other places in beautiful Romania. It is absolutely worth of seeing and visiting 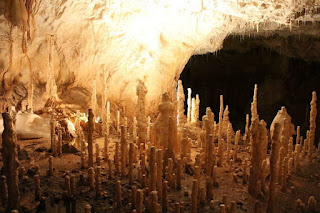