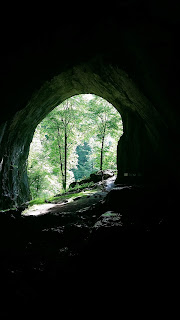 On the first day of our visit to Romania we saw the Meziad cave, which because of its unique character is a nature reserve. It was discovered in 19th century, but wasn’t open for tourists till the 70’s of 20th century, it could only be done after detailed recognition and constructing of the paths. Nowadays the cave is popular among the tourists but doesn’t seem to be too commodified.

Before our trip to Romania we were searching for information about the cave on the Internet, and on the many websites tourists advised taking a light torch due to the lack of electricity in the cave. On the spot it turned out that the advice was out of date as in the autumn 2012 there were some renovation works – the paths were rebuilt and the lighting was installed, according to modern technologies, which enable protecting the cave’s environment.
To be honest I can’t imagine sightseeing that particular cave only with a torch or a carbide lamp which used to be available for tourists, who didn’t bring their own torches. The cave makes great impression mainly because of its vast spaces. I think it was difficult to see the enormous space only in the light of a small torch
The Meziad cave is not only the longest cave in Romania but even in Europe (among the caves open to tourists) – it is 5 km long! But not only is the size impressive, it is unique as there are a lot of fairy-tale-like dripstones: stalactites and stalagmites. There are two levels one may visit, the levels cross and create The Natural Bridge, and the word bridge is deliberate here, as the passages were created by the underground rivers.
What makes the place even more unusual is the fact that the scientists found the traces of Paleolithic and Neolithic people and the cave bears. Nowadays about 3000 bats live here, most of them hibernated on the roof, yet few of them were flying above our heads. The lighting and sightseeing are organized in such way as not to disturb the bats.
It’s difficult to describe the beauty of the Meziad cave and express by words the experience. You have to see it on your own. I recommend it!