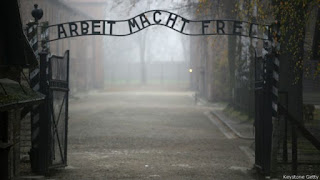 In the Polish lands captured by Nazi Germany, many death camps were established. The biggest intention of these camps were to destroy the Jews in a mass. Auschwitz is one of the  biggest death camp in Poland.
We visited Auschwitz in Krakow. The weather was terrible on that day. It was windy, snowy   and freezing cold. We had an unguided tour so we had bought many brochures and books about the camps. The camp consists of three major camps. Auschwitz I (main camp),  Birkenau, and Auschwitz III. Unfortunately 2,5 million people were killed in these camps. 2 million of them were Jews, and Polish, Gypsies and  Soviet POWs.
There are many blocks in the area. All of the buildings are dark, cold and full of fear.The Auschwitz extermination camp in Poland is the mostly  known one. While we were visiting Auschwitz we were so silent that  we couldn't say a word. We were all shocked . I can't express that heavy feeling in my chest. Auschwitz I- It is the first camp built by Nazis, it was used for the first experiments and murders, now turned into a museum. Auschwitz II (Birkenau) is the biggest camp and it is 3 km away from Auschwitz. We couldn't visit there because it was closed at that time of the day. Millions of people died in gas chambers there. Auschwitz III (Monowitz) the third camp, it was a labor camp and now it was completely destroyed. 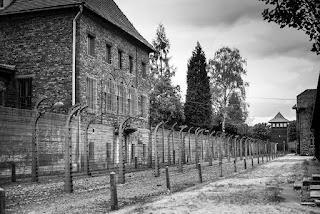 This is a place where millions people were imprisoned and killed. And everything in there was more real than any movie, documentary or a book. Walking through the buildings of Auschwitz was depressing. Seeing the piles of hair, shoes and personal belongings was devastating for us. We couldn't understand How? and Why? How could this happen? We will never forget about these places. Everone should visit these camps because remembering these horrors, visiting and  seeing them can help us to insure we never repeat them.
Fonts:www.tarihi olaylar.com 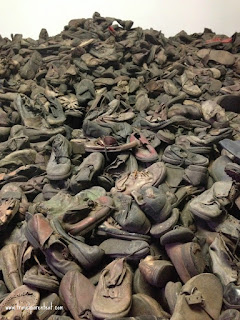